Here’s the piece and photos by Amy Davis from today’s Baltimore Sun. 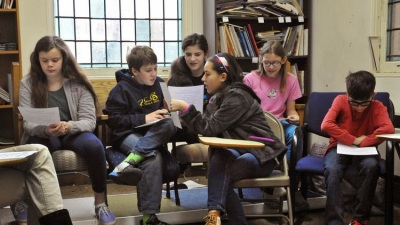 Check out this video!  (All of it’s pretty good, but go to minute 18:10 through the end of the episode if you’re in a rush).

I’m pleased the folks at Charm TV saw fit to feature Reservoir Hill and Beth Am in their weekly show My Town.  There are so many ways to portray a city, and this positive, heartwarming approach is a nice counterpoint to the standard fare of violence and corruption, the subject matter of so many Baltimore-focused shows and movies.

Don’t get me wrong, I am not one of those people who hates The Wire because it portrays Baltimore in a bad light. As far as I’m concerned, The Wire is one of the best shows to grace the airwaves. Ever. We, in Baltimore, in my hometown of Chicago, in Cleveland, New York, Atlanta, or Ferguson, MO, can learn a lot about urban challenges from this show because, on some level and to some degree, they are endemic in every city.  It takes a lot of courage and class to admit you have problems.  Shows like The Wire throw down the gauntlet.  There are plenty of ways we fail, but there are also countless ways Baltimoreans are rising to the challenge!

But this week, I had a slightly different reaction to a show.  A different show.  I, like millions of other listeners, have been firmly hooked by the NPR podcast Serial.  If you don’t know — and how could you not? — it’s tells the true story of a Baltimore man who, as a teen and student at Woodlawn High School, was accused and convicted of murdering his ex-girlfriend.  He’s fifteen years into a life sentence.  The podcast is thoroughly engrossing, raising all kinds of questions about the case itself but also about the criminal justice system in which it was so clearly mishandled.

Last week as I was my doing my morning workout in our home across from the shul and listening to episode 10, I was surprised, and not in a good way, by a throw-away line in Sarah Koenig’s narrative.  Koenig quotes a particular argument from the prosecution that ostensibly casts Adnan Syed as a masogynistic and vindictive young man because those are his cultural and religious values (his family is originally from Pakistan).  “How easy it is to stir stereotypes in with facts, all of which then gets baked into a story,” Koenig bemoans.  And she’s right.  Whatever the facts of the case, to imply that all young men of Pakistani heritage or all Muslims behave in a particular way or have identically depraved values is pure bigotry.

So Koenig is (rightly) concerned about prejudice when it comes to people.  She meticulously investigates each character (lawyers, cops, friends, etc.), every angle, each obvious or tenuous reason to suspect Syed’s guilt and every evidential, procedural or character-based reason not to.

But what made me frown that morning was my realizing she doesn’t seem to apply the same scrutiny to another prominent character in her story: the city of Baltimore.  She quotes a judge during jury selection as various potential jurors admit biases, outright prejudices and conflicts of interest.  One juror, Koenig reports, says, “we moved from a very peaceful town in Oregon to a violent community.”  In response the judge says flippantly, “welcome to Baltimore.”  It’s a punchline to her narrative and Koenig leaves us there to chew on it.

Art is meant to be provocative.  That’s what’s  great about The Wire; it makes us think and question and reflect.  And Serial does this too.  Sarah Koenig has millions of people around the world questioning our criminal justice system.  She’s a brilliant story-teller, but in so convincingly utilizing what she calls “the bad-ass city” as the seedy backdrop to her sordid tale, she flattens and ultimately does violence to a diverse, deliciously complex and, in my opinion, pretty great town.

Maybe her time as a Baltimore Sun reporter left her jaded, I don’t know.  I wish she felt as compelled to watch twelve minutes of the video above as she does to read thousands of pages of case history and record hundreds of hours of conversations.  Because I’m so taken with her and her program, I’d like to give her the benefit of the doubt, to believe she simply doesn’t know all the good stories about this town and not that she’s ignoring signs and evidence like so many characters in her podcast.

I ask you Ms. Koenig: In order to give us the big, robust and nuanced picture of Adnan Syed, do you really need to make Baltimore so pathetic?

I’m honored to be included in a rich and provocative new book on Rabbincal seminary education!

Click on this link to purchase the e-book or print copy!

This coming Saturday, Dec. 6, is our neighborhood’s annual Poinsettia Tour.  It’s a lovely event featuring homes and places of worship in Reservoir Hill and our surrounding neighborhoods.  Not surprisingly, featured locations are each marked by a poinsettia plant at the front entrance.  For years Beth Am has participated in the tour (We’ll be open after services from 1-2. Check it out!) despite its occurring on Shabbat, understanding full well that Saturday is a good day for non-Jews (and non-observant Jews) to mosey about appreciating some of historic Baltimore’s grandest and most architecturally significant edifices.  As you know if you’re a regular reader of this blog, whenever possible we at Beth Am strive to be not just in and for but also of our community and participating in the Poinsettia Tour is one good way to do so.

But I must say I feel just a bit awkward placing Beth Am on the list of destinations partially because the event is on a Saturday but mostly because of the name which reflects a degree of cultural illiteracy (“ignorance” is too strong and loaded a term).  This is a mixed community.  There are many Christians to be sure, but also Jews, Muslims, Hindus, Buddhists and any number of other faith traditions represented.  And poinsettias are, constitutionally by dint of their red and green color scheme, Christmas-oriented. This may not seem like a big deal, but I do believe the organizers of the event (who are friends and well-intentioned) are also missing an opportunity to engage certain member of or visitors to our community, helping us feel more a part of the festivities — and less apart.

Color, not of flora but skin, seems to dominate the news these days — with the epicenter of the crisis being in Ferguson, MO.  I’ve debated for a while whether to weigh with this blog, and I must confess I do so with some trepidation.  Nevertheless….

This weekend saw, among other things, the resignation of Officer Darren Wilson and St. Louis Rams players silent “don’t shoot” gesture which has juxtaposed the issue of policing and race and this weekend’s other major domestic news item: Ray Rice’s successful appeal and the ongoing national conversation about off-the-field violence among NFL players.

I was reminded of my own cultural illiteracy this morning as I read the provocative Jacqueline Woodson NY Times oped detailing the author and 2014 National Book Award winner’s experience of feeling blindsided by long-time friend and fellow author Daniel Handler (aka Lemony Snicket).  The subject of the piece was an inopportune fruit reference, and the offending fruit was a watermelon (yes, it’s red and and green which I fully recognize is only relevant in my own associative mind).  Here’s Woodson’s account:

“As I walked away from the stage to a standing ovation after my acceptance speech, it was the last place in the world I thought I’d hear the watermelon joke — directed by the M.C., Daniel Handler, at me. “Jackie’s allergic to watermelon,” he said. “Just let that sink in your mind.” Daniel and I have been friends for years. Last summer, at his home on Cape Cod, he served watermelon soup and I let him know I was allergic to the fruit. I was astonished when he brought this up before the National Book Award audience — in the form of a wink-nudge joke about being black.”
“In a few short words, the audience and I were asked to take a step back from everything I’ve ever written, a step back from the power and meaning of the National Book Award, lest we forget, lest I forget, where I came from. By making light of that deep and troubled history, he showed that he believed we were at a point where we could laugh about it all. His historical context, unlike my own, came from a place of ignorance.”
So here comes my confession: I had no idea watermelon was to African-Americans a fraught-fruit.  For whatever reason I was unaware of the phenomenon Woodson describes:  “…I had seen the racist representations associated with African-Americans and watermelons, heard the terrifying stories of black men being lynched with watermelons hanging around them, watched black migrants from the South try to eke out a living in the big city…with trucks loaded down with the fruit.”  Most of all, I didn’t realize (or never bothered to notice) that despicable black caricatures often feature the seedy melon.
Had I been in the audience at the National Book Awards two weeks ago, I simply wouldn’t have gotten the joke.  This coming from a white man who lives in a majority black neighborhood in a city below the Mason-Dixon line, a city with a sordid history of Jim Crow racism and much worse.
My point here isn’t self-flagellation; it’s to illustrate a point: cultural (and often historical) sensitivity is the cornerstone of healthily diverse societies.  With regard to Ferguson it seems to me, aside from the reactionary folks on both sides, there are two primary camps.  One group, fully acknowledging racism is alive and well in America and a double-standard does exist in our criminal justice system, is mostly concerned with the facts of the case: Who was at fault?  Was Officer Wilson justified?  What are the standard rules of engagement and did Michael Brown behave in a manner warranting the use of deadly force?  In other words, if he were a white kid would he still be dead?  This was the basis of Joe Scarborough’s rant on Morning Joe today.
The other camp, though, sees the Michael Brown shooting as a red herring.  They’re concerned with a different set of questions: What larger societal problems has this incident brought to the surface?  Should police forces be outfitted as quasi-military organizations or should officers get out of their cars, walk the beat and get to know the communities they serve?  What’s a healthier balance between protecting American citizens in a post 9.11 era and protecting the rights of those same citizens?  In what ways has race been a significant factor in police brutality, and how might this be addressed systemically?
I would submit that for any of us who don’t live in Ferguson (and most people who do) the first set of questions is much less important than the second.  We Americans think being informed is the same as understanding, so we assume an “eighteen-year-old punk” even if he was that is just that.  Like a watermelon is just a fruit or a poinsettia is just a plant.  But they’re not.  On some level they’re symbols representing cultural awareness or blindness.  Hillel the Elder said, “Do not judge another until you’ve stood in his place,” which is another way of saying we simply don’t know what we don’t know.  Remember that song from Avenue Q “Everyone’s a Little Bit Racist?”  The point isn’t that we all hate a little.  The point is that we all misunderstand a lot.
1