Spoiler Alert: No Torah was dropped before or during the writing of this blog.  (I know such things make Jews nervous!)  Ok, read on… 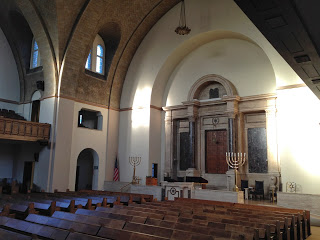 I’m often at Beth Am alone.  I live across the street and the office is closed one day a week.  So, quite frequently I find myself either working solo in the building, or running in to pick something up (e.g. a book) or complete a task (e.g. run off copies of a source sheet for class).  It’s eerily peaceful being in our ninety-year-old historic sanctuary late at night.

Recently, and on my way to a shiva minyan, I entered early in the morning, just as the sun was rising.   The light was filtering through our understated stained glass; long shadows from the wooden pews began to creep across the sanctuary.  It was a Monday and I needed to grab a sefer Torah for the service.  Even before I placed the tenderly tallis-wrapped scroll in my trunk (functionally upgrading the worth of my vehicle from Subaru to Maserati), I had a moment’s panic.  What if, there alone in the shul, attempting to remove the rimonim and breastplate myself, I somehow dropped the Torah?  Would I fast?  Would I tell anyone?  If a Torah falls in a shul, I thought to myself, and no one’s around to see it, has it made a sound?  Have I committed a sin?

The hypothetical reminds me of a scene from the golf movie The Legend of Bagger Vance when Matt Damon’s character hits a wild shot into the woods and then, clearing debris for his next shot, causes the ball to move.  The golfer is faced with a moral dilemma: Does he ignore the ball’s tiny movement, take his shot and potentially win the round or does he take the penalty stroke ?  His conscience is clear; he takes the penalty and 3-way ties Bobby Jones and Walter Hagen.  I think many of us would like to think we would do the same.

Much of my writing in this blog is about people, confronting, assimilating and transcending cacophonous urban living.  The story of this “urban rabbi” is often about relationships.  But as artist Edward Hopper pointed out in his paintings, there is solitude in the city — actually a great deal of it.  The moral life, no matter where one lives, derives from a sense of honesty with one’s self and, ultimately, with one’s God. We all have to decide what matters.  Can we live with a win if we know it’s really a lie?  Is the Torah sacred or not?

Michael Chabon, in an essay called “The Wilderness of Childhood,” brings a poignant question about raising children in today’s urban environment.  He describes growing up in Columbia, MD, not far from Baltimore. Chabon contrasts much of today’s child-rearing, especially among city dwellers, with his own experience exploring the forests and landscape near his home.  “Children endlessly revise and refine [maps of their worlds]. Childhood,” he writes, “is a branch of cartography.”

So often, though, we restrict our children’s movements, fearful for their safety.  Some of this discretion is warranted, but we should acknowledge something critical is also being lost.  Urban living brings with it many opportunities — of learning and sensitively to the world’s kaleidoscopic nature.  But navigating city streets, crime, poverty, and the like necessarily causes responsible parents to think long and hard about protecting their children from harm.

This summer, I took my son Shamir on a camping trip to Cunningham Falls State Park in Northern Maryland.  We had an amazing time, but our morning hike up the falls sticks out as illustrative of Chabon’s point.  That day, Shamir was absolutely determined to track the river to its source.  He climbed rock faces and leaped over water, sand and stone. He lead, I followed — and kvelled.

The only river near our home in Reservoir Hill is the Jones Falls.  There’s a nice bike path along it and herons nest in the branches above.  But I wouldn’t allow my son to go wading through that polluted stream, strewn with too much trash and run-off.

How can our children feel less encumbered in their own towns and neighborhoods?  Author Lenore Skenazy published an oped in the New York Sun a few years back in which she described allowing her persistent, nagging, 9-year-old son to ride the subway by himself.  Armed with a map, money and fare card, Izzie successfully rode the train home.  For this, Skenazy has been called the “Worst Mom in America.”  You can read about it and watch the Today show interview here.  But many, including this rabbi, feel kids need permission to take reasonably safe risks.  Skenazy’s blog and book (and parenting philosophy) is entitled Free Range Kids.  How caged today’s children must so often feel!

Raising children safely is important, of course, but raising independent, resilient kids is also critical.  The Talmud (Kiddushin 30b) says parents are obliged to teach our children to swim.  They learn to swim.  We learn we can’t swim for them.  Each parent must decide how and when to let go, but at some point, we all must do so.

0
How often do we think of distractions as inherently counterproductive?  We scorn interruptions and lament the ubiquitous texts and the screens that insert themselves into the quiet of our lives.   Last week in Maryland, vehicular hand held cell phone use became a primary offense; how many accidents are caused by distracted driving?  We live in a society monumentally struggling to maintain focus on just about anything, a conversation, a project, a book, the road.  We try to unitask in a multitasking world — and so often fail.
But can distraction ever be good?  A couple weeks ago I had a distracted morning.  I decided to go for a run around Druid Lake.  It was early and the sun was just rising.  It was so beautiful I felt compelled to stop, pause Rabbi David Wolpe’s podcast (I recommend them if you’re looking for some good Torah), and pull out my iPhone so I could snap a photo.  But as the sunrise evolved and the sky took on different hues, as I made my way around the reservoir and saw the city-scape, the park, the lake, the Moorish Tower I stopped again and again to capture just the right angle, each new perspective.

Realizing I wasn’t getting my heart rate up, and running out of time to get back to the house, shower and drive the kids to school, I decided I’d better focus on my running.  But a few minutes later, I passed by a group of gentlemen hanging out by the park’s exercise equipment.  Among them was a man named Steve who was one of the first people I met when I came to Baltimore.  That first summer, our workout schedules overlapped.  He would introduce me to his buddies, and we would check-in, shoot the breeze and compare exercise notes.  By that September morning I hadn’t seen Steve in well over a year, so of course I stopped to say hi.  By the time I walked in the door to shower that morning, I had completed one single lap of Druid Lake (approximately 1 1/2 miles) in about 40 minutes. It was a terrible workout. 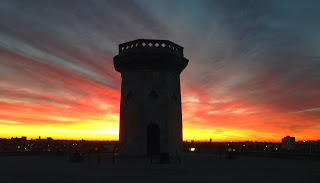 Our Sages tell us we should ideally say one hundred blessings a day, pausing time and again to acknowledge some aspect of God’s abundant, beautiful and purposeful world.  The tradition gives us permission, even a mandate, to be distracted.  But most times workouts must be completed, spouses relieved of their duties and kids delivered to classes on time.  How do we know when to remain focused?  Which experiences and encounters should grab our attention and distract from the routines of our lives?  Perhaps the answer lies in the very screens that so often draw our attention.  It used to be that screens were something we looked through to see the world — beyond our windows or front doors.  Now screens are what we look at instead of the world around us.

That day in September I found myself mesmerized by the simple and elegant beauty of a sunrise, and I used my phone’s camera to capture the moment.  That morning I was grateful to see a friendly face and I paused to reconnect.  Blessings are our response to wonder, and wonder is the natural result of truly listening to the universe as it calls out to us.  Humanity is calibrated to respond to that universe with gratitude and awe.  We know when our time has been wasted.  We know when we’ve allowed ourselves to be distracted from things that matter by things that don’t.  And we know when the opposite is true.
That was the worst workout I’ve had in a while. But the best morning.
2